Bruin recently attended an Artemis Coaching panel event hosted by HSBC entitled “Does Flexible Working Reinforce Gender Stereotypes?”. As the title of the discussion suggests, it was a lively and topical debate focusing on how undertaking flexible working options is perceived particularly in the financial world. Although the panel and the room agreed that flexible working should be an option for all; the discussion highlighted how far we still have to go in changing attitudes to agile working in general.

Our hosts for the evening, HSBC, have their own network named ‘HSBC Flex’ Co-Founded by Sam Feeney which provides support to all HSBC employees globally who work flexibly or apply to do so. Within HSBC they have 49% of their workforce taking up some form of flexible working option. In their own internal survey they found that the majority of their flexible workers were men. This was an unexpected result for most of the room but should this be a surprising statistic?

As panellist Elysia McCaffrey (Deputy Head of the Government’s Equality Office) emphasised, it is now a law that after 26 weeks an employee has the right to request flexible working. Yet there are multiple reasons why people feel uncomfortable taking up this option. Male or female, part of this reluctance to undertake flexible working is that you are perceived as less ambitious or lacking career drive. 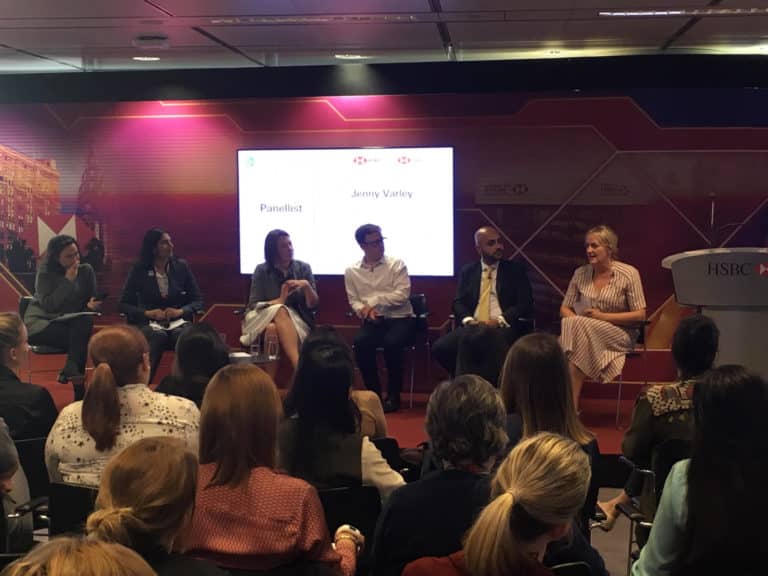 Will McDonald (Group Sustainability & Public Policy Director, AVIVA) is part of an all male job share with his boss. Even though he is a prime example of how not only men but anyone can work flexibly without compromising career ambitions, he recognises that many people still feel they cannot be both career driven and a flexible worker. This comes down to whether an organisation embraces a culture of supporting agile working arrangements; almost making them the new norm. A quick way this can be achieved, as Will suggested, would be through independent exit interviews. This may highlight to employers the volume of staff they are losing due to the lack of flexible working options. The subsequent costs in both recruitment fees and time in replacing the role would be able to show firms the monetary value of not adopting a culture of embracing flexible working.

Having examples such as Will within organisations and networks like HSBC Flex helps in providing a role model in how flexible working can be effective. Yet a proactive step needed is to equip managers with information. Jenny Varley (Global Head of Digital Communications & Employer Brand, HSBC) spoke about how she had previously been against flexible working options within her team but has since revised this. Having a culture of being present in the office for long hours could not only lead to burn outs but also a less productive workforce. Since having successful flexible working in her team and job sharers, Jenny is now a leader of HSBC Flex and has an agile team. Jenny emphasised the need to reskill people managers so that they see the benefits of flexible working and are able to have conversations about arrangements with their reports.

Overall, the discussion quickly highlighted that flexible working is something available to all but there are barriers to people being willing to take up the offer. Predominantly, company culture has a large part to play. Employees want to feel as though they not only have the option of working flexibly but that in doing so they are not wrongly perceived as being any less ambitious than their colleagues. The way we get to this point is through promoting senior role models who work flexibly, equip people managers to have these conversations and to show firms through exit interviews how failing to embrace agile working can impact their company.

This website uses cookies to improve your experience while you navigate through the website. Out of these cookies, the cookies that are categorized as necessary are stored on your browser as they are essential for the working of basic functionalities of the website. We also use third-party cookies that help us analyze and understand how you use this website. These cookies will be stored in your browser only with your consent. You also have the option to opt-out of these cookies. But opting out of some of these cookies may have an effect on your browsing experience.
Necessary Always Enabled
Necessary cookies are absolutely essential for the website to function properly. This category only includes cookies that ensures basic functionalities and security features of the website. These cookies do not store any personal information.
Non-necessary
Any cookies that may not be particularly necessary for the website to function and is used specifically to collect user personal data via analytics, ads, other embedded contents are termed as non-necessary cookies. It is mandatory to procure user consent prior to running these cookies on your website.
SAVE & ACCEPT